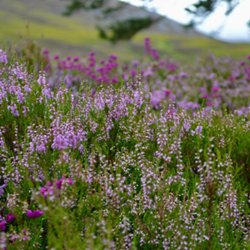 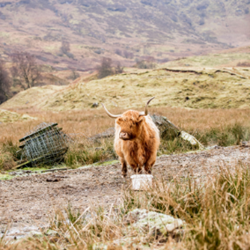 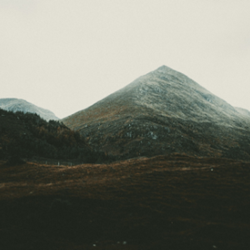 Ben A’an is a mountain that’s small in stature compared to many Scottish mountains, but it offers spectacular views that rival those from mountains twice its size. Situated in the heart of the Trossachs, the location of Ben A’an in central Scotland makes it far more accessible than some of the bigger mountains in the far north of the country, particularly if you’re spending time visiting Scotland’s biggest cities. It takes roughly an hour and 20 minutes to drive there from Glasgow, and around an hour and 45 minutes from Edinburgh.

The route up from the car park takes a recently improved path that’s very easy to follow, taking you up a steep climb that levels off fairly quickly, offering you a glimpse of the pyramid peak of the hill. This is a great place to stop and have a snack before continuing up the path which now becomes rockier. Eventually, you’ll be rewarded as you reach the summit, which gives fantastic 360-views of Loch Katrine and the surrounding mountain ranges. The walk returns down the same path.

There are several long walking trails in Scotland, but the West Highland Way and the Great Glen Way are two of the best. Don’t be daunted by the term ‘long distance’! The beauty of these walks is that you can choose whether to tackle them all at once (over several days, of course - although there are running races on both routes where competitors tackle the paths in one continuous run if you’re feeling brave!), or you can choose to do a shorter walk along the route.

If you’re looking for something a bit more remote, there are also plenty of coastal walks in Scotland. Head to Moray to see if you can spot some dolphins between Bucke and Cullen, as well as enjoying the picturesque natural formations of Bow Fiddle Rock and The Whale’s Mouth. For a romantic getaway, head to the Isle of Canna in the Hebrides and walk around the entire coastline of the small island before admiring the historic remains of A’Chill at sunset.

Stretching from Milngavie, just outside Glasgow, to the Highland town of Fort William, this 96-mile route was Scotland’s first long-distance walking trail, and remains the most popular to this day. It’s extremely well way-marked along the route, meaning there’s little chance of getting lost, and it avoids any high summits, so it’s suitable for most walkers with a decent level of fitness. The entire walk offers fantastic views, and it’s an incredibly varied route, from the rolling lowland hills just outside Glasgow, passing along the shoreline of beautiful Loch Lomond, before entering rugged Highland territory, through the vast expanse of Rannoch Moor before heading towards the bustling town of Fort William, which has a train station, making it easy to head further into the Highlands to explore more, or back home.

If you choose to walk the entire route, there are several natural places to stop along the way for the night (although if you’re camping be aware of the local by-laws around Loch Lomond which prohibit wild camping. In most of the rest of the country, you can camp freely where you please.) If you’re thinking of tackling a shorter section instead, consider walking up the Devil’s Staircase in Glen Coe for some of the best views on the route, or take on the section between Kinlochleven and Fort William.

This path stretches from the end of the West Highland Way to Inverness, the capital of the Scottish Highlands, taking you from coast to coast. This path is another low-level one, although there’s also the option to take a higher route between Fort Augustus and Drumnadrochit for more dramatic views. If you love the Scottish lochs, this path is a great one to pick, as it runs along the entire length of both Loch Lochy and Loch Oich, offering ample spots to rest and drink in the views. Again, you can tackle this path over a few days or simply take a stroll along it for a few hours before turning back. If you’re choosing this option, the most accessible starting points are Fort William and Inverness.

Steall Falls, located just outside Fort William, is without a doubt one of the best waterfalls in Scotland.

The path from the car park is well-maintained and well-signposted, although it’s very rocky in places and can be quite slippery in wet weather. It can also be a busy path because, as well as walkers on this route, it gives access to some of the area’s popular Munros.

The short hike leads you to Steall Falls, Scotland’s second-highest waterfall with a drop of 120 metres. Don’t miss out on the wire rope bridge to the base of the waterfall, if you dare! The grassy meadows make a great spot for a picnic or even to set up camp for the night - otherwise, head back along the same route you came.

Much further north in the remote wilderness of Assynt is Stac Pollaidh, one of Scotland’s most uniquely shaped mountains. It’s a great hill to tackle with friends as it involves some easy scrambling, making for brilliant photo opportunities.
From the car park on the shore of Loch Lurgainn, the path soon diverts into two branches, but it doesn’t matter which you take as they meet up on the far side of the hill just below the rocky summit ridge. As well as fantastic scrambling, the summit also offers great views of neighbouring peaks such as Suliven, which is a longer and more strenuous hike, but well worth it if you have a few days in the area.

If you are staying in Assynt for a while, don’t miss out on the region’s beautiful coastal paths. Achmelvich Beach is one of the best in the country, with pristine white sand, and a youth hostel and campsite right by the shore.

We’d be remiss not to mention Ben Nevis in a round-up of great Scottish walks for adventurous people! The highest mountain in the UK, standing at 1352m, Ben Nevis is surprisingly accessible as it’s located just outside Fort William. The route is straightforward but strenuous, and well-marked throughout. Remember, though, that conditions at the top of a hill can be vastly different to the weather at sea level, so it’s important to prepare properly, make sure you have the right equipment, and keep an eye on the weather at all times. The mountain path is by far the most common route to take, and the one we recommend, although there are several others available. The path zig-zags its way up the mountain, allowing you to catch a glimpse of where you’re headed. There are plenty of opportunities to stop and catch your breath along the way - and make sure you don’t forget your camera, as the views on the way up are just as good as those from the summit.

Getting there by train

Avanti West Coast goes as far as Glasgow and Edinburgh, but the Scottish railway system extends as far North as Thurso, passing through the Highlands and stopping at places like Aviemore, Fort William and Inverness. You can book any train journey through our Journey Planner, even if the stations and services aren’t run by Avanti West Coast.

Some walking routes have public transport access, with bus routes that take you close to the start, whilst for others, you’d be better off hiring a car. Whatever hikes you decide to tackle with your friends, make sure you plan ahead and do your research. Decide on several hikes located in one area, around Fort William, in Assynt, or even on Skye, and you can make the most of a few days away. Remember that Scottish weather can be a little unpredictable at times, so pack for all weathers and try not to let a little rain ruin your fun!

Book direct with us and you won't pay any booking fees.

Find out all about our onboard food and drink options.

The newest way to travel on our trains.

Home to plenty of history, music and, of course, football, Liverpool is a fantastic destination for family days out. Discover our favourite places to visit.