Select a date for your journey
Tickets available
If you don't want to be tied down to a specific train time, choose one of our open return tickets.
×Close

Select a date for your journey
Tickets available
If you don't want to be tied down to a specific train time, choose one of our open return tickets.
× Close

Select a date for your journey
Tickets available 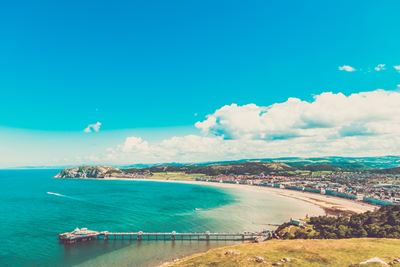 Llandudno is one of the best seaside towns on mainland Britain, as with many seaside resorts it was a small village until the Victorians brought railways – and working class holidaymakers – in the nineteenth century. The attractions of this particular town aren’t difficult to see, though. Long, sandy beaches are perfect for enjoying the sun and the sea; and the whole area is dominated by the 200-metre-tall Great Orme. Within minutes there are other resorts like Conwy and Rhos-on-Sea to explore, and Snowdonia is just there in the background, perfect for a day trip.

The main east-west line between Chester and Holyhead opened in the 1850s, and passed through Conwy, to the south of the outcrop on which Llandudno lies. The need for a railway right the way up north to Llandudno itself and down south to Blaenau Ffestiniog in Snowdonia led to Llandudno Junction being built. A town grew up around it, and the station that was built there is now the busiest in Wales by passenger numbers. If you’re going to Llandudno itself from England or anywhere else on the mainland, you’ll need to change at Llandudno Junction.

All in all, it’s a lovely place for a splash in the sea, a stroll down the prom or a climb (or a ride) up the rock. And here’s all the information you need to get there by train from all across Britain.

It’s simple to get to Llandudno Junction from anywhere in Britain. You’ll probably need to hop into another train to take the 10-minute trip to the resort itself, but here’s how to get to the main station.

Things to do in Llandudno

If you’re visiting Llandudno, it’s pretty much a given that you’ll be visiting the beach. There are two of them to choose from, one along the North coast, and one on the West coast, which reaches all the way down to the mouth of the River Conwy at Deganwy. Just pick a spot, roll out your towel and you’re good to go. If you love sunsets, the West-facing beach is a must-visit as day turns to night.

Another essential is a trip up the Great Orme, an enormous headland reaching out into the sea, which takes its name from the Norse word urm, or sea-serpent (just like our word worm) – you can certainly see the similarity. You can walk or drive to the summit complex, but the proper way to do it is via the tramway or the cable car. Once you’re up there, on a clear day you’ll get commanding views of the town below, the North Wales coast, Anglesey, the Isle of Man, Blackpool, the Lake District and Snowdonia.

The Great Orme isn’t just for being on – you can go in it, too. Yes, there has been a copper mine here since the bronze age (fortunately enough), and it tells its own story about the deep history of the area. You can have a guided tour of the mines, where you’ll marvel at the bravery and ingenuity of those who worked deep underground in the days before electricity and ice cream.

Are you a regular rail user? Or will you be travelling to Llandudno just the once? Either way, we know how to save you money on your tickets.

For the regulars, the best way to save is to get yourself a Railcard. Once you’ve bought it, all your off-peak travel for one year (or three if you prefer) will be subject to considerable discounts – that means a third or even a half for some groups. It’s worth every penny.

If it’s a one-off trip, there are still ways to save. First, avoid peak hours, which is when fares are at their highest. Second, book well in advance – in fact, the further in advance, the better. Third, if you’re travelling with friends, family or colleagues, you might benefit from booking as a group, to the tune of 20% off your fare. And finally, if you book direct through our website or app, there will be no booking fee, and if you find the same ticket cheaper elsewhere, we’ll simply refund you the difference.

All our ways to save can be found here, so take a look.

All you could ever need to know about Llandudno Junction Station can be found here:

It includes accessibility, Wi-Fi, parking, toilets and much more, so give it a click before you come.