Flint is home to Wales’s oldest castle and some major sporting figures, so why not get on the train and visit this town on the Welsh borders? 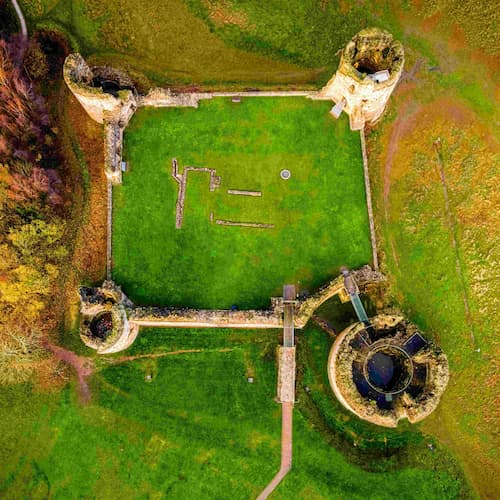 Flint is one of those towns that punches above its weight when you compare its size to its cultural impact. Located on the Welsh side of the River Dee, a stone’s throw from Wirral, it’s both an industrial town and a commuting town for Chester, Liverpool and Ellesmere Port. The town grew up around a Medieval castle and gets its name from the stony ground on which it was founded. The castle ended up being pretty significant, and was the first of the “Iron Ring” of castles all over North Wales. It was where Richard II was handed over to Henry IV, making it a key location in Shakespeare’s Richard II.

In modern times, Flint is probably best known nationally for its links with sporting greatness. Ian Rush, Liverpool’s prolific goal-scorer of the 1980s and 90s, was born in St Asaph nearby but went to school in the town. And more recently, the double Olympic taekwondo gold medallist Jade Jones shot to international fame and got Flint a gold post box after her wins in 2012 and 2016. She too went to school here.

So whether you’re looking to delve into Welsh history or hope some sporting success will rub off onto you, here’s all your train and ticket information for your trip to Flint.

Flint is on the main line from Chester to North Wales and Holyhead, so has plenty of quick services wherever you’re travelling from.

Why should I visit Flint?

Things to do in Flint

Wales is famous throughout the world for its castles, but here in Flint is the site of the very first. It was incredibly sophisticated for its day when it was first erected in 1284, and it’s testament to the quality of its construction that much of it remains intact today. A visit to the castle is a great way to spend an afternoon, especially if you’ve got children who are fans of Horrible Histories (or are huge Shakespeare buffs).

Since 2012, some people have made it their mission to visit all the post boxes that were painted gold in honour of the Team GB athletes who won gold medals at the London Olympic Games. If you’re one of them (the visitors, not the athletes), then Flint will be one of your stops thanks to Jade Jones and her mastery of taekwondo. You’ll find the post box right outside the Post Office on Heol-Yr-Eglwys (Church Street) in the town centre. You might also want to try your hand at ten-pin bowling at the Jade Jones Pavilion on Earl Street, where there’s also a cafe and bar.

Ways to save on travel when heading to Flint

There are plenty of ways to save on this site, and you can use our Best Fare Finder to zero in on a great price for your ticket. You can start by booking direct through this website or our app, as there will be no extra charges, unlike when you book through a third-party vendor. The further in advance you buy your ticket, the cheaper it’ll be too, so get yours as soon as you know you’re travelling. And booking as a group of three or more will also save you money – have a look at our group bookings info to find out how.

You might be a fan of Ian Rush, but you don’t have to travel during the rush hour when you visit Flint – avoiding peak hours and terrible puns are key to a happy life. If you travel a lot by train, and usually go outside peak hours, it could well be worth buying a Railcard. The one-off fee can more than pay for itself when you consider it can save you a third off the fare every time you travel away from peak, and that savings rise to 50% for 16 and 17-year-olds.

For information on parking, Wi-Fi, toilets and accessibility, click the link below:

Thanks for choosing Avanti West Coast.