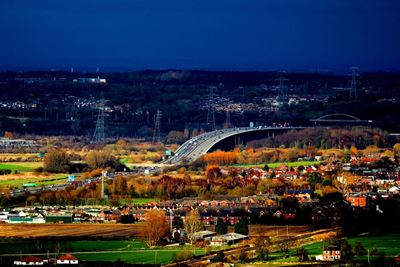 Runcorn is a town of contrasts. It’s an industrial town, dominated for a century by the chemical plants and docks that run along its western banks of the Mersey; several industrial estates are home to a host of factories and offices, too. But the industrial areas are concentrated around the edges, leaving the main town green and domestic, with tree-lined streets, conservation areas and lots of wide open spaces. It was also one of the first New Towns in the UK, and these huge estates are where the majority of the population live.

Runcorn Station is just next to the Old Town and sits on the main line between Liverpool and Crewe. Immediately to the north, the track sits on the impressive railway bridge that was built in 1868 and crosses the Mersey between Runcorn and Widnes – all trains to Runcorn from Liverpool cross it. Next to the impressive steel arch road bridge that was completed in 1961, and that’s now accompanied by the equally spectacular Mersey Gateway bridge, completed in 2017.

It’s easy to reach Runcorn by train from anywhere in Britain. Here are some times to give you an idea how long it will take.

Things to do in Runcorn

If you love civil engineering, especially bridges, you could spend a day touring the town admiring the feats of construction. The Victorian railway bridge is a Grade II listed building, and although you can’t walk across it, you can admire the work from below. Right next to it is the 1961 steel arch bridge, which you can walk across, affording wonderful views of the Mersey from 25 metres above. Finally there’s the new Mersey Gateway bridge, a huge modern cable-stayed bridge that spans a much wider section of the Mersey between Runcorn and Widnes. 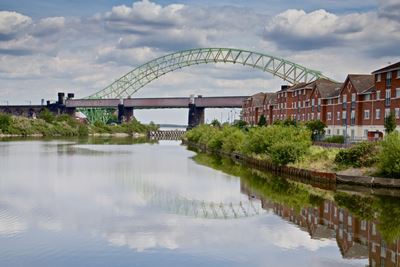 Runcorn, like much of Cheshire, sits on a huge expanse of sandstone, and it has been quarried in Runcorn since Norman times. Hundreds of local buildings are made of this stone, but also further-flung structures like Liverpool, Manchester and Chester Cathedrals and the docks in New York, USA. The quarrying stopped in the 1930s, and nature took over, which means there are now acres of lovely woodland walks, amazing views over Liverpool and some high quarried cliffs for rock climbing. There’s also a park, and the fantastic Esposito’s Deli where you can grab a coffee, a snack and a delicious ice cream. 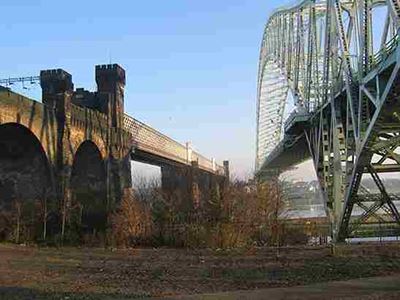 Norton Priory was an abbey that had been largely forgotten about after being largely demolished by Henry VIII. It became a site of interest in the 1970s, when excavation started, and revealed walls, mosaic floors and a stunning crypt. There’s also an 18th century walled garden with all manner of plants, and a large woodland to explore. 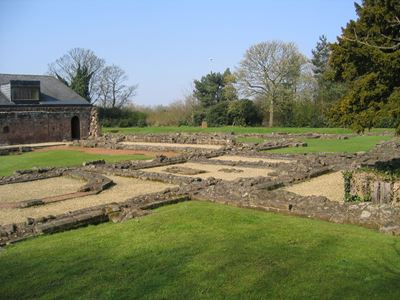 There are plenty of ways to save money on your travel to and from Runcorn. The biggest saving you can make is simply to avoid peak hours – travelling outside of the rush hour will mean significant price reductions. It’s even better if you book in advance rather than buying on the day. In fact, the further in advance you book, the cheaper it’s likely to be.

Another way is to book direct through this website or our app. Because we don’t charge a fee on Avanti West Coast tickets, like external ticket vendors do, that’s a saving straight away. Are there a few of you travelling? If so, you

might qualify for a group booking discount – combined with booking ahead, it’s a great way to save and make sure you can all sit together.

Finally, frequent travellers should invest in a Railcard. They can be bought for various ages, and the one-off payment at the start gives you a whole year’s worth of off-peak discounts, so it’s easy to see how you can make massive savings if you travel a lot on the train. Find out more details on our ways to save page.

To find Runcorn Station, and get information on what you can expect when you get there, check out its page here: