To much of the outside world, Watford is as much a part of London as Wembley or Walthamstow, but the locals know that it’s much more than that. Watford is its own place with its very own personality, and acres of clear green grass (which admittedly are mainly amazing golf courses) between the town and London’s north western reaches.

It’s not hard to see where the confusion comes from, though. It’s the northernmost parts of the London Underground map, with a station at the end of the Metropolitan Line, and it has a football club that punches well above its weight, partly thanks to its most famous supporter Elton John, who was born just down the road in Pinner.

So whether you’re travelling to Watford for a spot of shopping, to watch the match, or to go on a tour of a film studio, we’re all you need to get there, from all corners of mainland UK. You’ll find a happening town full of family fun, fine dining, great shopping and lovely open spaces to stretch your legs. And you’ll be in no doubt that you are definitely not in the capital city.

Watford is easy to get to from many lines on our network, so hop on board for a change of scene.

Things to do in Watford

One of the most popular and impressive attractions in Watford has to be the Warner Bros Studio Tour, where Potterheads of all ages can relive some of the most magical locations such as the Great Hall, Forbidden Forest, Platform 9¾ and Diagon Alley, all produced in wonderful detail. You can try your hand at film-making, witness some original props and see some amazing special effects, and of course, come home with your very own wand. As you’d expect, families are very well catered for in this fantastic commuter town. So if you’ve got kids, there’s a wealth of options, from ten pin bowling to soft play areas, and older people will love the laser guns or paintball, or perhaps a mind-boggling escape room to solve. Click here to discover family fun.

Eating out is just as easy in Watford, where you’re spoiled for choice when it comes to cuisine. From the exquisite Glasshouse, where your taste buds will be utterly delighted, to some more mainstream chains, independent cafes and dozens of excellent bars that serve traditional British food, whatever you feel like eating or drinking, you’ll find it in Watford. 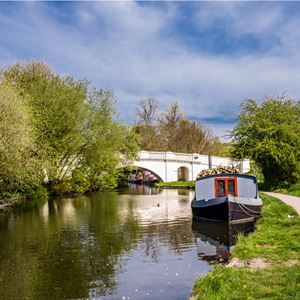 There are plenty of ways you can save money on your journey to Watford. First among them is to avoid peak hours – that’s the start of the working day – or even better, go for Super Peak hours. Another quick way to save is to book direct through this website or our app, as you won’t pay a penny in fees – and if you find the same ticket cheaper elsewhere, let us know and we’ll refund the difference!

If you’re a regular rail traveller, we’d strongly urge you to get yourself a Railcard. They can cost as little as £30 a year,  but you can get big discounts when you use them, which can be as much as 50% for 16–17-year-olds.

Travelling in a group? If you all book together, you can save money, just like you do when you buy a multipack of baked beans. Have a look at our group booking page for more details. This and many more money-saving ideas are covered on our ways to save page, so do check it out.

Watford sits just next to the town centre, so you probably won’t need extra transport to hit the shops or eateries. Here’s all the information you need to know about the station: